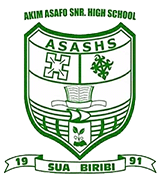 Akim Asafo Senior High School is situated in the East Akim Municipality of the Eastern Region on the major Accra - Kumasi road, just about twenty minutes’ drive from Suhum.The school is named after the historical town 'Akyem Asafo' which is located on the Asafo-Maase Feeder Road 11 Km from Kukurantumi and 8 km from Apedwa junction.

The School was established as a community school on 18th February 1991, under its first headmaster Mr. Kyere Alexander Kofi. The school started at the present Methodist JHS premises with seven (7) students. The first student enrolled in the school was Master Karim Ibrahim. Later the school was moved to its present site in1994.

In 1996 some Baptist Missionaries from America visited the school and decided to adopt it. As part of an arrangement, the name of the school was changed to Akim Asafo St. Paul’s Community Secondary School(ASPACSS). The school however lost contact with the Missionaries. The previous Government decided to rename all the Secondary Schools as Senior High Schools, hence the name of the school metamorphosed to Akim Asafo Senior High School.