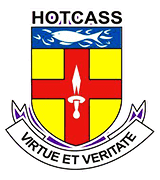 The school was founded in October 1969 as a private day school by the Anglican Church of the Most Holy Trinity and is situated in the courtyard of the Cathedral Church on the High Street, Accra. The school continued as a private co-educational institution until September 1974 when it was absorbed into the Public Education system making it a fully-fledged Government assisted Senior High School with a total population of a little over 1000 students.