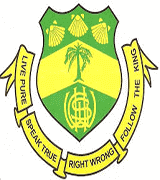 Wesley Girls’ High School was founded by the wife of the 2nd Methodist Missionary to the Gold Coast, Mrs. Harriet Wrigley in 1836 with 25 girls. Her aim was to give the girls basic training in housekeeping and Catechism. Subjects taught included writing, reading, sewing and religious education. Classes were held at the Manse, in the Standfast Hall near the Victoria Park in Cape Coast.

However, five months after arrival, Mrs. Wrigley died. It was not until 1837 that an efficient school head in the person of Mrs. Elizabeth Waldron took over the running of the school. She administered the school for 43 good year and laid a solid foundation for what was to become the Wesleyan Girls’ School and Training Home. Values such as fortitude, integrity and truthfulness soon become the hallmarks of the products of the school.

Their high academic ability encouraged the Methodist church to agree to the provision of higher education for girls. Consequently, in 1884, Rev. W.M. Cannell who was then the Headmaster of Mfantsipim School stared the Secondary section with 20 girls.

The two levels; primary and secondary continued by fits and starts and were sometimes closed down due to acute shortage of funding. It even suffered a temporary loss of identity when it had to team up with Mfantsipim as a co-educational Secondary School under a new name, the Collegiate School.

By 1900, the school was on its own again with Mrs. H.J. Ellis as the Headmistress. The School in the early 20th century was dominated by the able leadership and constructive work of Sister Evelyn Bellamy, a deaconess who headed the school from 1914 to 1943. it was during her time, precisely on 8th June 1925 that Dr. Kwegyri Aggrey visited the school ‘to educate a boy is to an individual but to educate a girl is to a educate a family’.

In 1951, the Secondary School section was separated definitely from the primary when Miss Olive Compton moved the Secondary division of the school to its present site at Kakumdo. The firm establishment of the High School is attributed to Miss Compton who conceptualize the school as H.M.S Excellence and had the school designed architecturally as such.

With time the glamour of the high school eclipsed the primary section which has still not regained its former glory till today.