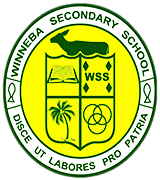 The school was founded through the establishment of the private school Ghana Secondary and Commercial Academy in Winneba by Mr. Bortey in the year 1949. As a result of managerial and financial problems, Mr. Borteys school children agitated for the take over of the school by Ghana education services.

Caught in the web of the nation wide students strike during the Positive Action and Civil Disobedience era, and under the impression that the school was one of Dr. Nkrumah’s schools, the students advocated for a new and efficient manager. When Dr. Nkrumah heard the clarion call of the students he quickly requested Mr. A. J. Dowuona Hammond to proceed from Peki Ghana Secondary School to Winneba in order to mobilize the striking students to form a new school.

With the help of the late Mr. Kofi Agyare, the propaganda secretary of the CPP, Winneba Constituency Mr. Hammond gathered 21 students made up of boys and girls, spreading from Form 1 to Form 3, to start a secondary school. The first school prefect of the school was Master Kingsley Kuranchie, who by dint of hard work rose through the ranks of the legal profession to become a High Court Judge.

The new school briefly occupying Yeboah Memorial House, moved to an abandoned wooden structure formerly used by the YMCA for the predominantly white officers of the Royal West African Frontier Force during the World War II. This structure was located on the premises of the south campus of the University of Education of Winneba.

After a while, the school relocated to the SCOA buildings, now known as the central campus of the University of Education of Winneba. In 1960 the school moved to its present premises.